Ads are the bane of the internet. There was a time when the internet was non-commercial, there were no ads, and the public taxes paid for the internet. But that was also a time when one couldn’t order the latest gadget from your favourite online service. So perhaps we are better off with today’s internet, but the ads do tend to be overwhelming at times.

But what if you could block ads on the entire (home) network? We’ll look at two DNS-based solutions, Pi-Hole and adblock on OpenWrt.

Before diving into the solutions, it is good to have a view of how DNS (Domain Name Service) works. Getting on the Internet requires two basic elements:

Take the example of your device looking up the address for www.google.com, the request will go to the first-hop DNS server which won’t know the answer, but will then ask the upstream router for google.com which in turn would ask the root server for .com who has the answer for google.com, finally down to Google’s DNS server which knows the IP addresses for www.google.com, where is passed back down the chain (moving right to left in the diagram below) back to your device. All of that in less than a second, often less than 200ms.

DNS is a distributed system, designed to not have a single point of failure. Except for your local DNS server (usually your home router), there are always multiple DNS servers for each Domain (e.g. makikiweb.com has ns1.omnis.com, ns2.omnis.com, ns3.omnis.com as DNS servers).

Pi Hole and Adblock on OpenWrt both use DNS to block Ads by becoming your first-hop DNS server, and returning IP address not found when the queried for the address of the an Ads server.

By becoming your network’s DNS server, Pi-Hole can control which DNS responses have real IP addresses, and which (blocked) ones don’t.

Although Pi-Hole claims to support IPv6, that support is a bit challenging, in that IPv6 works differently than IPv4. The Pi-Hole authors have made the classic mistake that IPv6 is just IPv4 with a bigger address.

IPv6: getting an address and The Problem

Pi-Hole to their credit offers a DHCPv6 server to complement the IPv4 DHCP server already included. However, it ignores that many devices, such as Android devices do not support DHCPv6.

A second method of getting a Global IPv6 address is via SLAAC or StateLess Address Auto Config. This method requires no server. You can think of it as, pick-a-random-address-and-check-that-no-one-else-is-using-it method. Android and ChromeOS devices only use SLAAC.

The Problem, then becomes, how can Pi-Hole support SLAAC. 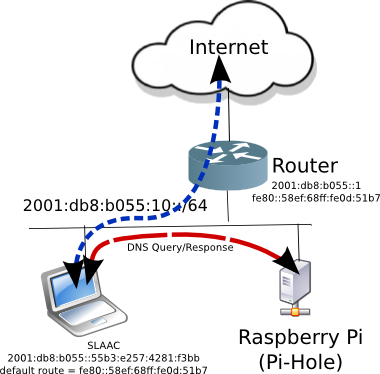 Letting the Pi-Hole provide DHCPv4 and DHCPv6 as well as DNS services works well if you don’t have any SLAAC-only devices in your network.

SLAAC is a standard too

The SLAAC standard actually pre-dates DHCPv6. It was the only method of getting an address automatically in the early days of IPv6. DHCPv6 was added later, because of the many options that DHCP can convey, such as NTP (Network Time Protocol), RADIUS (authentication), and DNS (Domain Name Service).

Although SLAAC doesn’t have all the options of DHCPv6, the Router Advertisement (RA) can also contain DNS servers (RDNSS in RFC 8106), providing the basics of accessing the Internet, a Global Address, and a DNS server(s).

Another Solution: adblock on OpenWrt Router

The key problem with Pi-Hole is that it splits the path between DNS requests and datapath to the internet. By running adblock on your router, all packets are headed for the same place (the router), and it is easy to handle blocking ads. 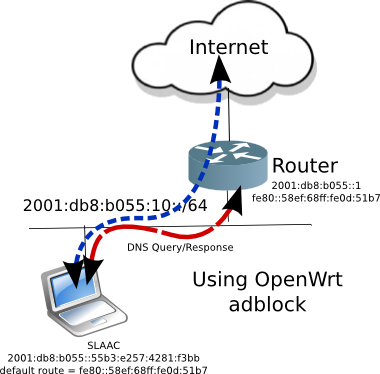 Now whether your network uses DHCPv6 or SLAAC, all packets flow to the router, where adblock can block the ads, by responding to DNS queries that advertiser domains have no IP address.

The key advantages of using adblock over Pi-Hole are:

But since adblock lives on your router, it is more constrained. Memory and storage are measured in MegaBytes, not GigaBytes as they are on the Raspberry Pi.

I find the Block Lists on both Pi-Hole and adblock to be blunt tools, which don’t have good definition. For example, if I am on a website, and I am seeing an Ad, which block list do I add to prevent that ad? To be honest, both systems have problems with this situation.

Installing adblock on OpenWrt is easy. Use the web interface System->Software or ssh to the router and use the CLI package manager opkg

The last item libustream-openssl is required to download the block lists over TLS (or https).

Using the web GUI, navigate to the new menu Services->Adblock and tick the checkbox “enable Adblock”, and click the blue “Save & Apply” button at the bottom, and you are done!

By default adblock has a few lists already checked yielding a block list of about 3400 domains, which although small, does a remarkable job.

You can always return to the Services->Adblock page and add additional block lists. I have run as many as 100,000 blocked domains on a used $20 router I got off of UsedVic with only 64 MB of RAM, and it performs pretty well. However, as you add block lists, keep an eye on the available memory on the router. After loading 100K blocked domains, the free memory on the router shrank from 32MB free to 14MB free. 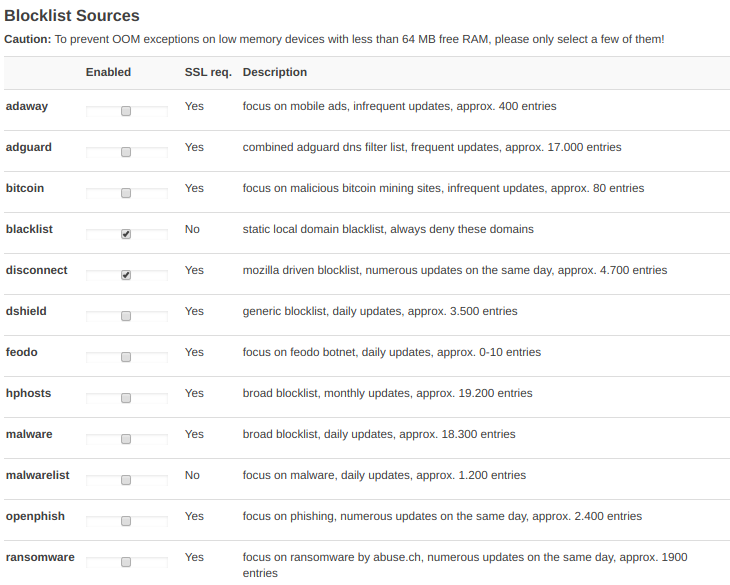 By using adblock on an OpenWrt router:

OpenWrt routers don’t have to cost an arm and a leg. And, not only do you get free software updates, but you can add other services like adblock.

So go out and enjoy the Internet again, now with fewer annoying ads.